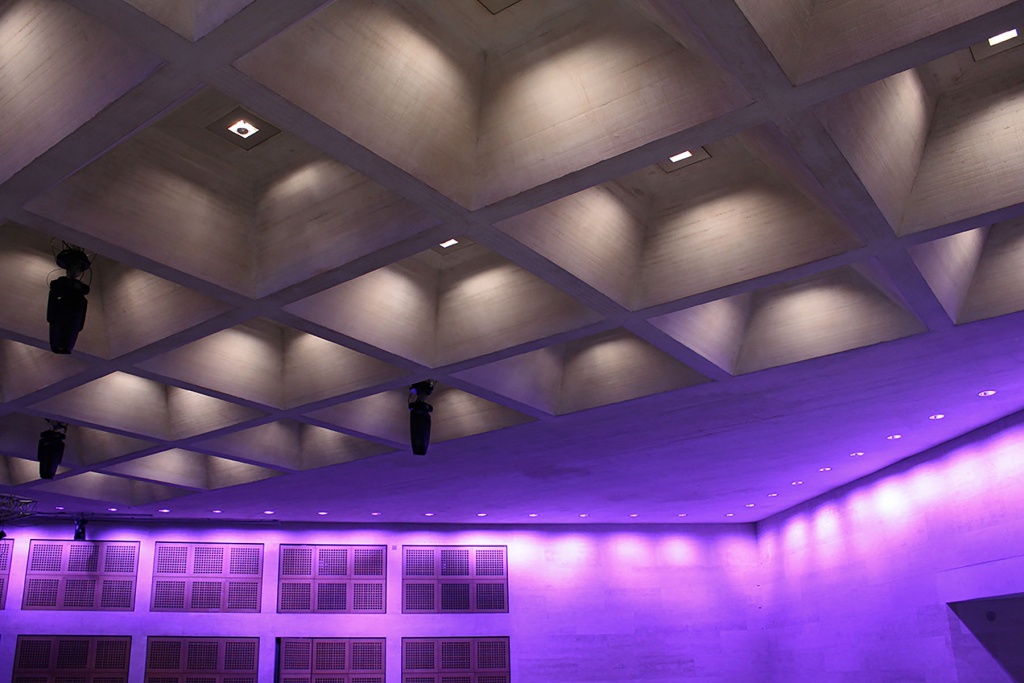 The multi-purpose venue is used for a diversity of events like chamber concerts, spoken word performances, lectures, film screenings and numerous others.

A team from Anolis France was led by architectural lighting specialist Bruno Francois who worked closely with Anolis HQ in the Czech Republic, the venue’s technical / stage manager Didier Degros and installers / systems integrators SATELEC to find a solution.

The project involved the replacement of accent lighting above the seats with 26 x Ambiane HP111 PW (3000K) fixtures and custom hangers, and upgrading of the previous PAR 56 wall lighting fixtures around the room, with 67 x Ambiane HP111 RGBWs with bespoke collars and brackets.

The wish to replace the original fixtures with more modern and energy efficient options had been ongoing for some time and the environment presented several challenges!

The Auditorium fixtures are extremely difficult to reach due to sections of the roof being completely inaccessible. It’s also a heritage listed building, so a complex set of rules must be followed for any work undertaken or any aspects that are changed.

This was also part of a wider lighting upgrade being applied – section-by-section – throughout the Louvre complex. As part of that, in 2020 Robe France supplied six T1 Profile moving lights to the auditorium to be used for key lighting, and Anolis responded to a tender put out for the auditorium lighting, and their bid was chosen.

Many of the Auditorium’s events involve a video element, so the flicker free operation of the T1s for HD camera environments was a must for Didier. With Ambiane featuring this same characteristic in addition to accurately matching the T1s in colour and the white temperature ranges, this put the brand in a strong position, together with the superior colour mixing of the wall washing Ambianes and the super-smooth theatrical grade dimming and DMX control.

Enthusiastic from the start, the Anolis team visited the venue several times for mock-ups, demos, experimentation, and lengthy discussions on finding ways for the venue to achieve the lighting it wanted.

Due to all the rigging challenges involved, a completely custom solution was proposed to achieve the desired creative results as well as being physically possible – with a bit of intelligence and imagination – to install!

It was this zeal, the ability to think ‘out-of-the-box- and meticulous attention to detail that helped Anolis win the deal, and the lights were supplied to SATELEC via Anolis partner SPX.

The original wall washers were installed in the Auditorium when it was built in the 1990s, via roof access above the ceiling, with convex pyramid-shaped mirrored structures created around the lights to bounce the light off and down the side walls.

The access was then closed off, and no drawings or plans could be found!

Bruno and the Anolis team were not daunted by this! After much back and forth, they created a special mounting bracket that enabled each Ambiane fixture to be held with both hands and inserted from below into the 20 cm gap in the mirror structure by technicians working at height, with the lens, mirror, and old PAR bulb and holders already removed. The lens and mirror were then put back into place, and the same screws used to secure the Ambiane HP111 RGBWs in place.

A special short trim for the luminaire was also developed to assist the installation crew together with a custom bracket that gives the whole fixture a ‘wiggle’ factor of being able to slide and rotate it just enough to get a perfect focus onto the auditorium walls.

“We were doing this in the complete reverse order of the original installation,” explained Bruno, revealing that patience, lateral thinking and determination produced the result that pleased everyone involved.

The Ambiane HP was ideal with its excellent output, vivid colours and because the size was close to the old PAR 56s. The fixtures were fitted with 80-degree lenses and a 30-degree internal foil to spread the light horizontally for optimal interaction with the mirror elements – a trick discovered during one of the many test sessions.

The ceiling lighting above the seats was always intended to be white and the light planner, Ingelux, overseeing the wider Louvre complex lighting upgrade project, had already stipulated the CRI and DUV which should be below 0.002.

So, the Ambiane HP111 PW white LED engine was calibrated to produce the exact ‘pure white’ variant needed, and these fixtures are fitted with 20-degree lenses.

The standard mounting brackets for the units were changed for brackets that are L-shaped on both sides, allowing the fixtures to be mounted directly on the ceiling in the centre of mirrored ‘collars’ which are similar to those surrounding the wall washers.

All the Ambianes in the room are DMX controlled via a ChromaQ Vista L5 console. The ceiling lights are programmed in lines for sectional control, and the wall wash fixtures are individually controllable to produce light curtain effects.

Bruno comments, “It was a fantastic collaboration with Didier and SATELEC and sales company SPX (an Anolis re-seller), and we are all extremely proud of what has been achieved in such a prestigious Auditorium. It’s a tribute to everyone’s passion and commitment to finding exactly the right solution and in overcoming the many practical challenges involved to produce a great result.” 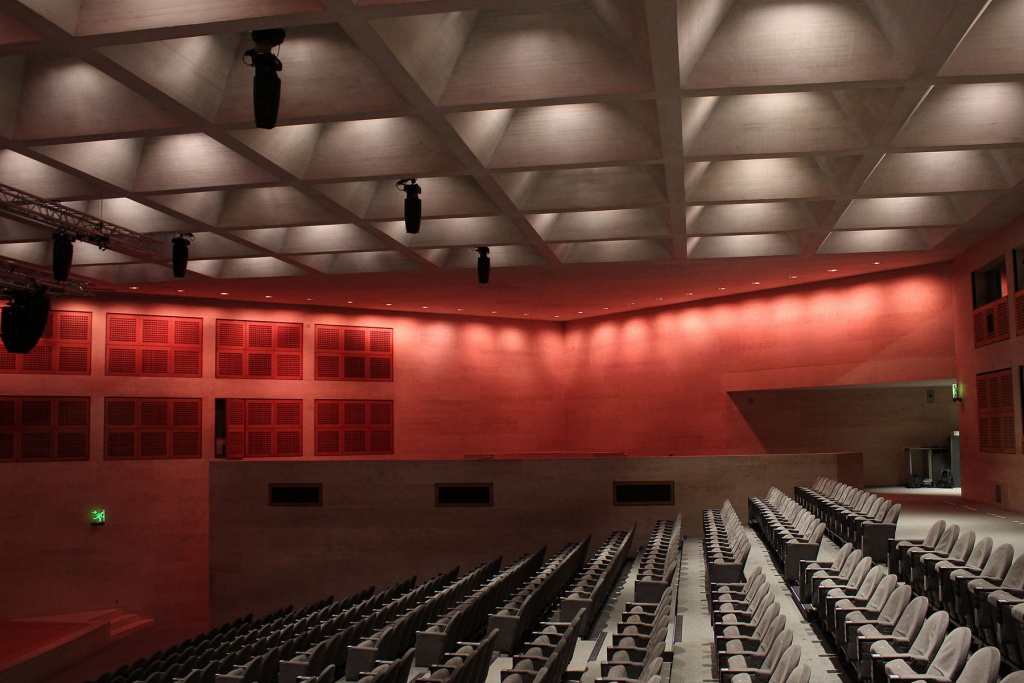 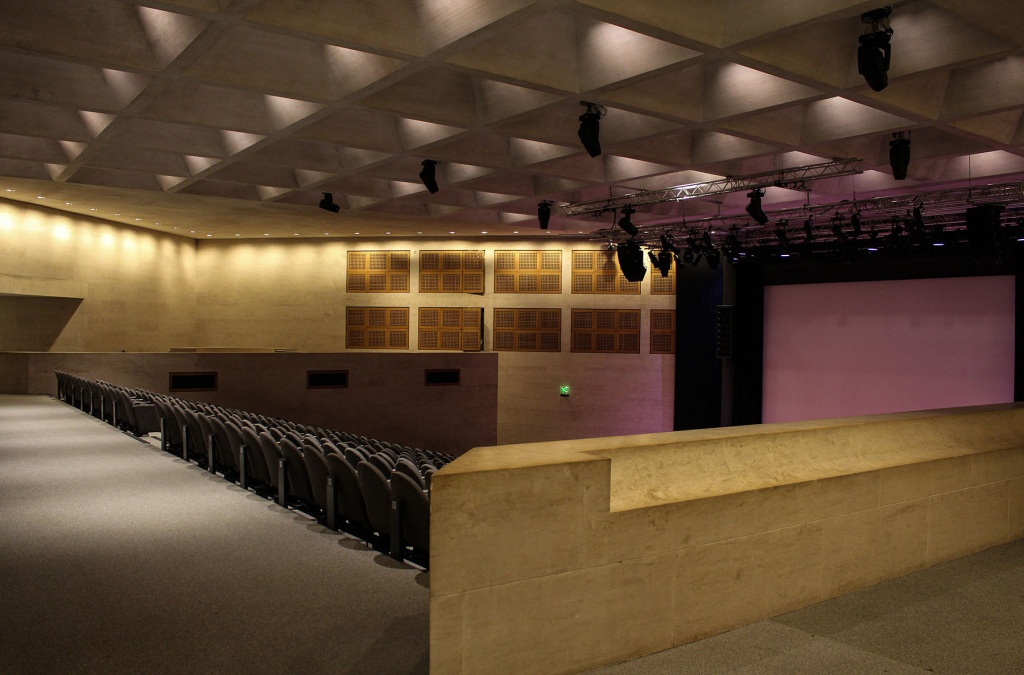 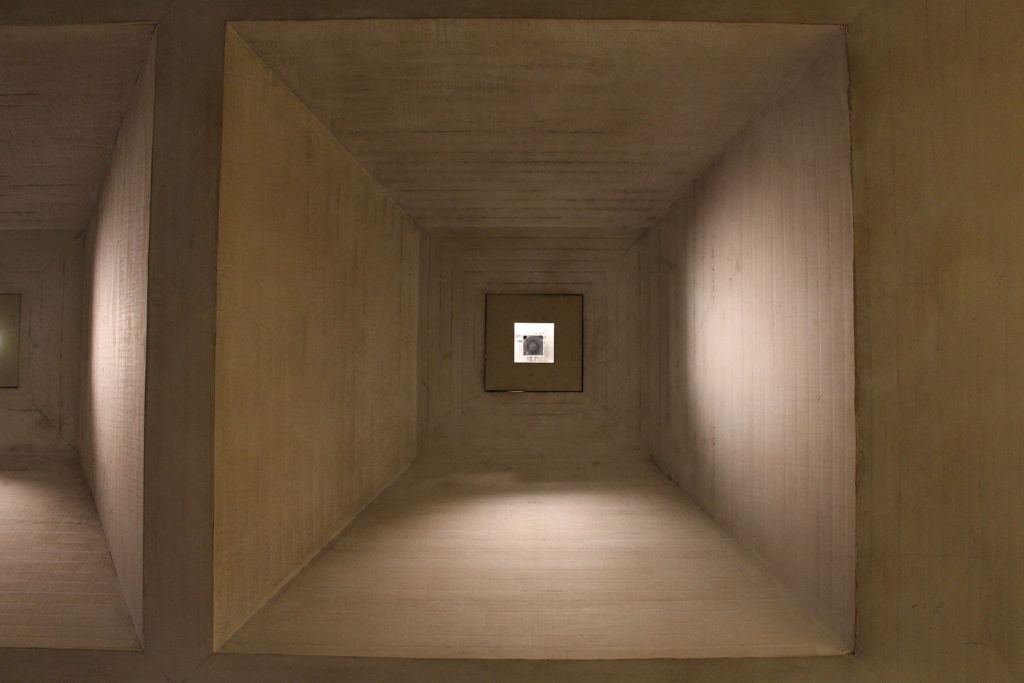 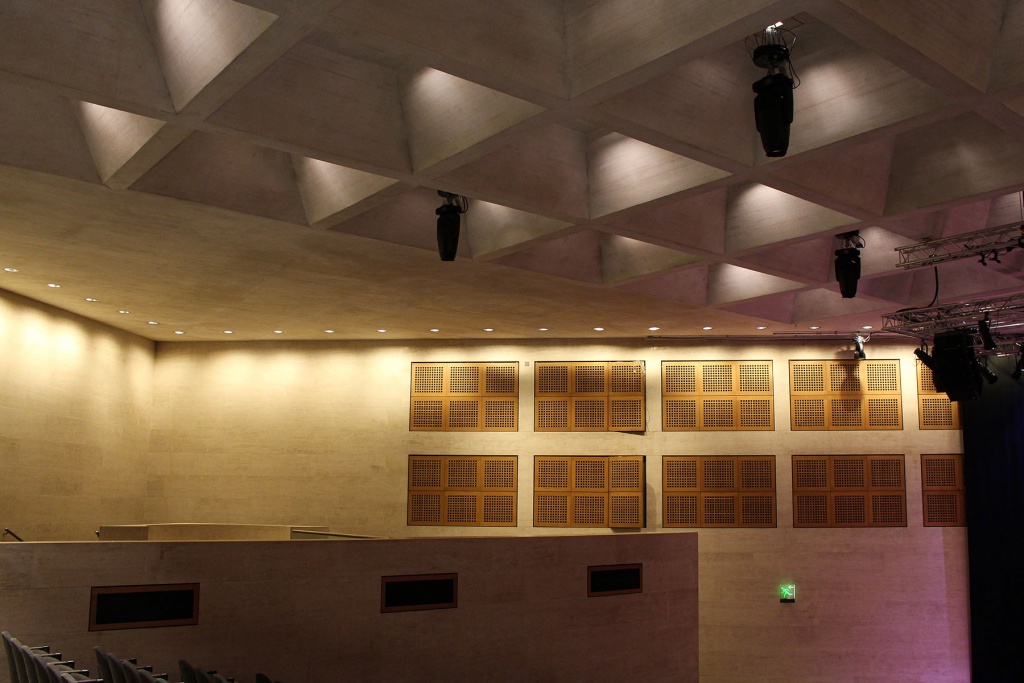