Various landmark installations that have been lit with Anolis lighting fixtures have been turning blue on Thursday evenings for the ‘Clap For Carers’ initiative in support of the National Health Service (NHS) and other essential workers engaged on the front lines in battling the Coronavirus Pandemic.

This includes: Bromley High Street in Kent, a major thoroughfare in the heart of the city;  The O2 Guildhall in Southampton Hampshire, a popular live music venue; and Rhyl Promenade in North Wales where several key features are lit.

Anolis UK’s Simon Gooding commented, “It’s great to see so many venues across the UK uniting to show their support for essential workers in these difficult times, and especially those that have been forced to close due to restrictions. Utilizing the Anolis fixtures that were once highlighting their buildings to energise and impress people means they are now standing proudly in Blue for respect. Stay safe!”

The scheme for lighting the façade above key shopfronts was designed by Matt Owen from Technical Entertainment Services working for (the London Borough of) Bromley Council, and the lighting comprises a mix of Anolis Divine 160s and ArcPad 48 fixtures – over 50 in total, which are attached to the base of the façade.

Famous author HG Wells whose masterworks include The War of The Worlds and The Time Machine was born in 1866 in a china shop which once stood where the Primark site is now!

Opened in 1937, the main concert / show venue in this building is now managed by the Academy Music Group and is one of the most popular live music showcases on the UK theatre / town hall touring circuit. That part of the building is currently closed under the lockdown, however, the exterior façade is still shining bright … lit with Anolis ArcSource 96 integrals and ArcPad 94s.

The architectural lighting was supplied via Sera Technologies who won a tender to supply for the project from Southampton City Council. 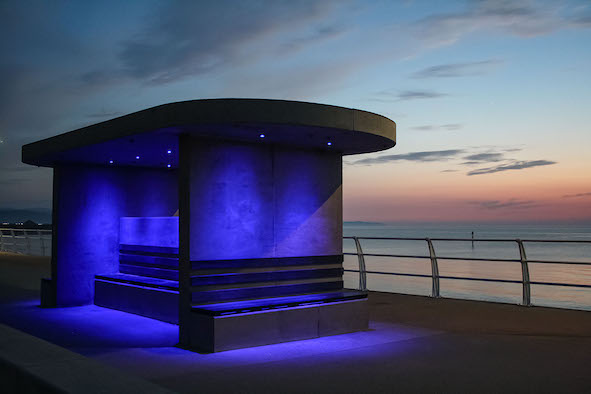 All the Anolis-lit areas across the seaside town of Rhyl are turned blue for the NHS including the Pavilion Theatre, Clock Tower, Sky Tower, waterfall, and seafront viewing shelters.

The spectacular 80-metre-tall Sky Tower is highlighted with ArcSource Outdoor 48MC RGBW integrals which transform it into an elegant beacon of light at night with smooth and even coverage of lumens up and down the mast.

The current Pavilion Theatre is located further along the seafront on the East Parade where an opaque Perspex strip covers ArcLine Optic 36 RGBW linear fixtures running up the exterior of the tower, with more lights brightening up a large panelled area on the venue’s front façade.

The concrete viewing shelters were the first element of the overall Rhyl lighting scheme to be implemented … and they are brought to life with ArcSource 1MCs RGBWs which produce a stunning blue.