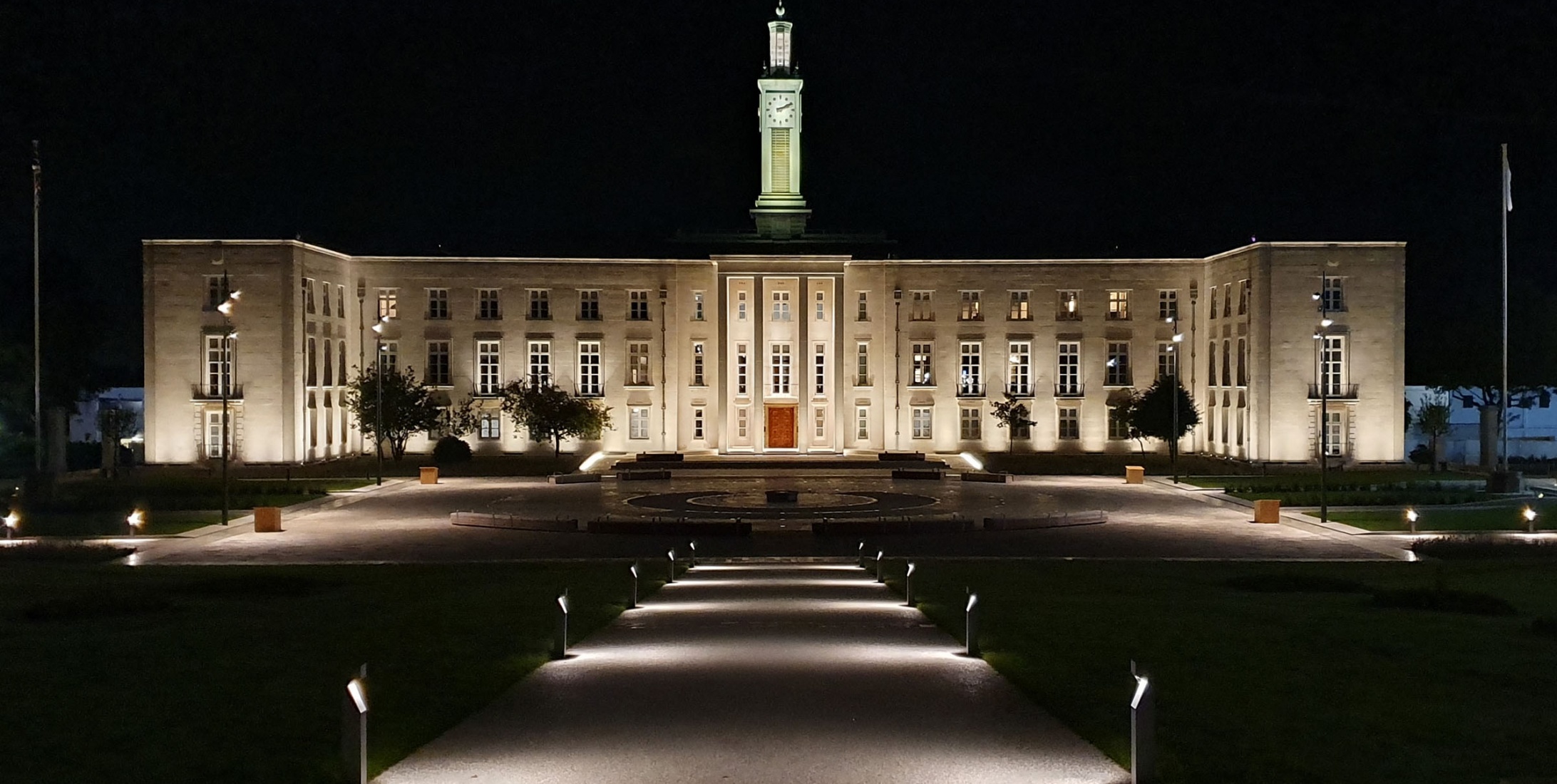 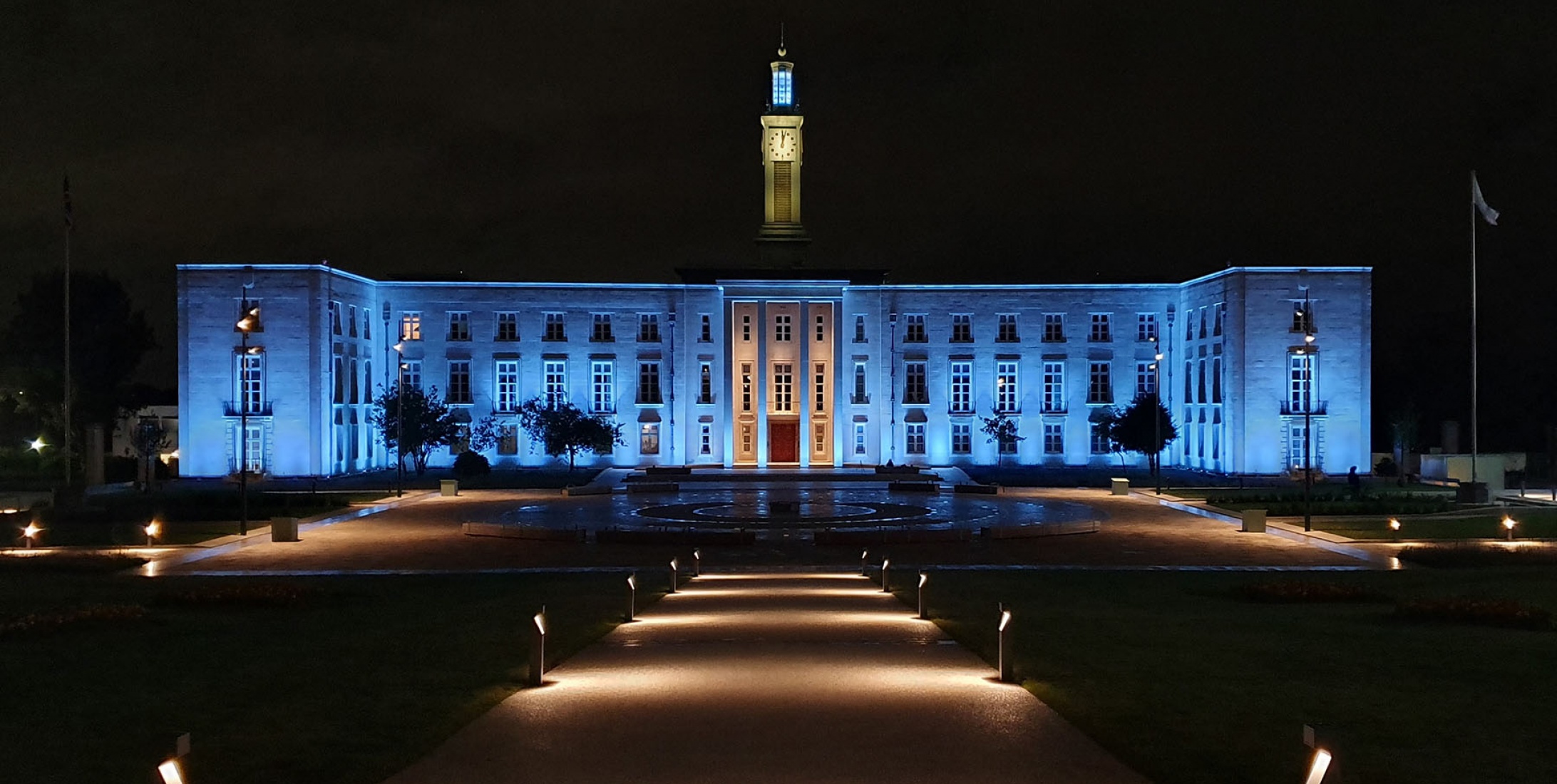 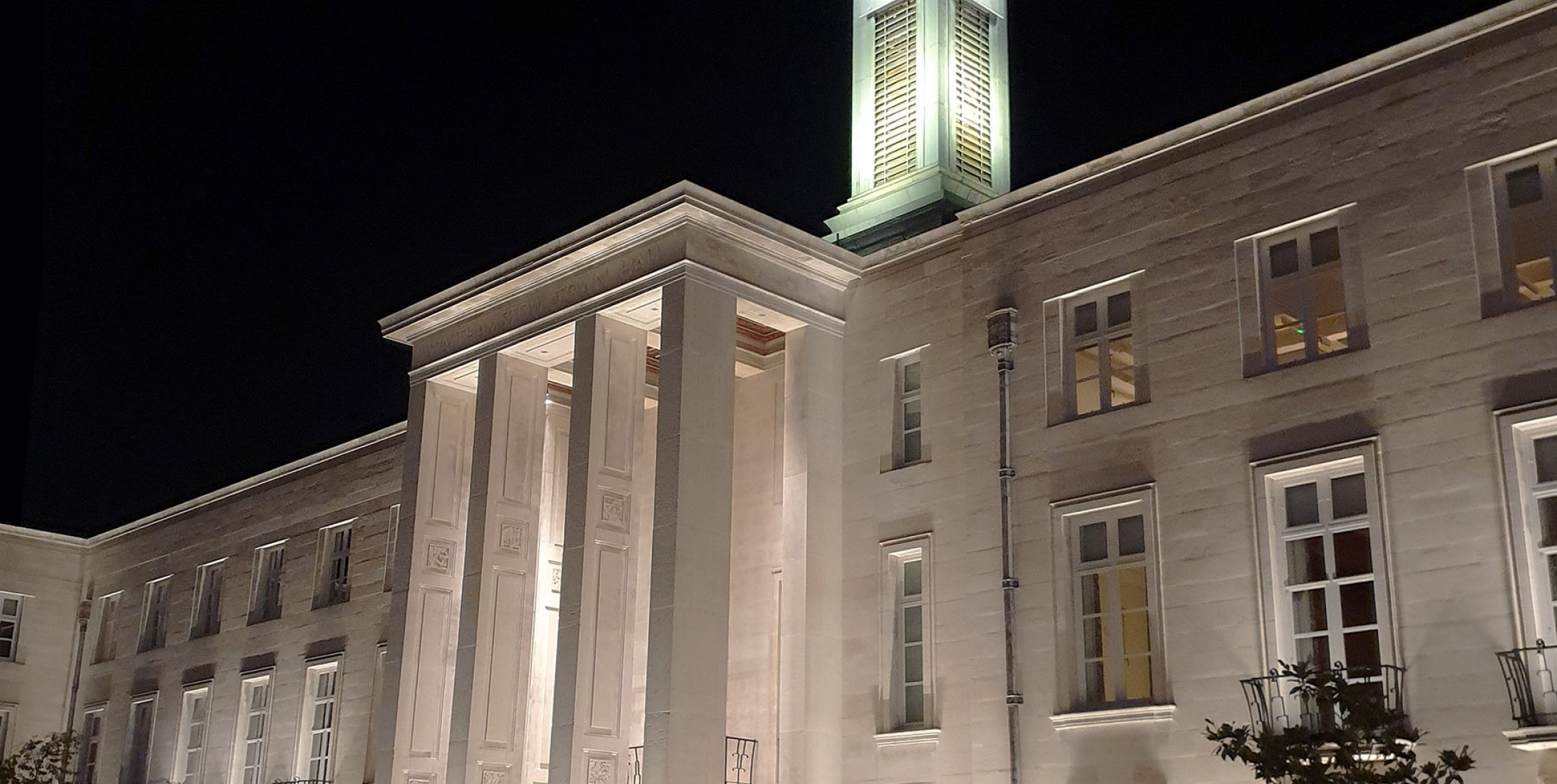 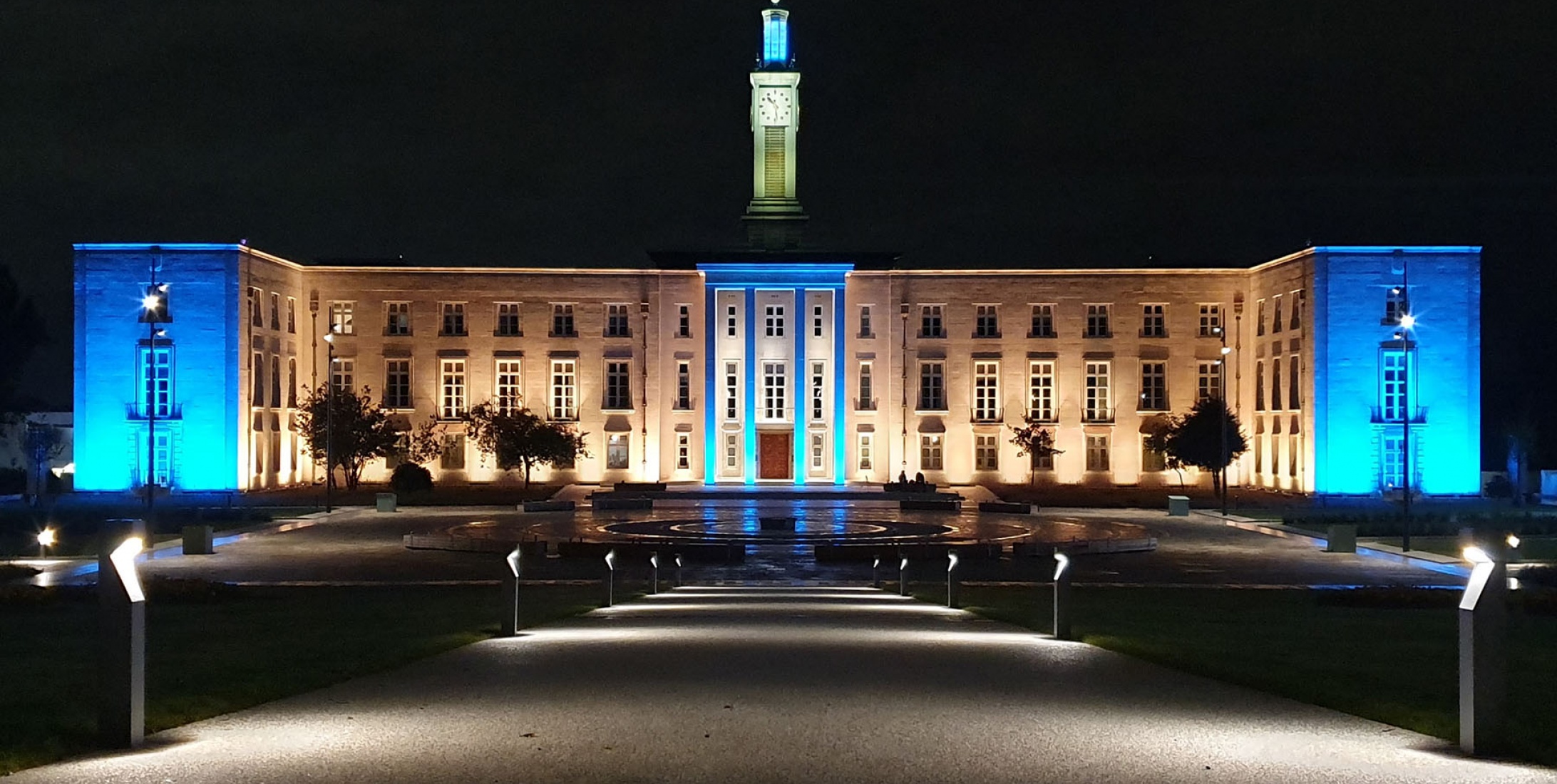 Waltham Forest Town Hall (formally Walthamstow Town Hall) is a municipal building located in Walthamstow, East London. The Town Hall is an impressive building and home to the headquarters of Waltham Forest - a London Borough Council. A Grade II listed building, designed by Architect Philip Dalton Hepworth in stripped classicism style, the building is constructed in Portland stone. The construction that began in 1938 was interrupted by the outbreak of the Second World War, but the building was nevertheless completed and opened to much acclaim in 1942. The design involved the main frontage with 19 bays facing the entrance and the central section featuring a three-bay full-height portico with piers supporting a frieze with inscription and a tall copper-clad clock tower at roof level.

Waltham Forest Council were looking to replace the façade lighting of both the Town Hall and Assembly Hall. The exterior lighting scheme project was part of a substantial two-year refurbishment and upgrade plan involving the whole building and its surrounding civic areas.

Lighting Consultants Pritchard Themis was contracted to design a new exterior lighting scheme for the front facades that was led by architects Hawkins/Brown. Their brief was to transform the building and surrounding environment into an integrated modern workspace combined with a lively civic campus that would welcome staff, visitors and residents to the heart of a thriving and diverse East London community. The new lighting scheme would generally run on white unless it is a 'flag day', special celebration or event when various colour options will be used to mark the occasion, offering the perfect backdrop.

The renovations also included the design and installation of the stunning water feature centrepiece in the Plaza's 'Civic Square.' Located in front of the complex comprising of 144 individually programmable water jets that can light up and dance to music and have been a big hit with public events in this central gathering space.

The council had previously held one-off events in the gardens using lighting to successfully project onto the buildings at night, which was something Waltham Forest council wanted to continue to do. The new lighting scheme needed to live up to the expectation of delivering something better!

The project had other constraints to factor with both the Town Hall and Assembly Hall being Grade II listed buildings, fixing anything directly to the Portland stone façade would be hard to pass by English Heritage and the Planning Officer.

Architectural Architects Hawkins / Brown tasked Pritchard Themis to craft the exterior lighting scheme who selected the Anolis Eminere family of fixtures for the project due to their quality output and superior colour mixing. A stylish signature white illumination was created for the front of the large H-shaped Portland stone building, complete with an array of colour changing special looks to celebrate 'flag days' national and ethnic festivals, plus other cultural, social events and occasions.

In addition to illuminating the Town Hall facades in a crisp white base colour, the Emineres provide large coloured backdrops to offset the water feature, so colour was central to achieve a bright RGBW linear fixture with a low profile and tailored finish for maximum neatness.

A compact and powerful linear solution was required with a good range of optics and glare control options, but also needed to be ascetically pleasing with being on show to the public. High colour rendering was another key prerequisite along with sustainability and the requirement for different length luminaires. A sister in-ground version was also required for the area around the porticos where new paving was being installed.

The Eminere range was specified as offered the perfect solution with both inground and surface mounting versions, the flexibility within the range portfolio, the quality of output and intensity, DMX control, the super-smooth dimming and the finessed colour mixing on top of a choice of lenses.

Fifty-six Eminere 1,2,3 and 4 RGBW fixtures are located around the building, mostly attached to a low perimeter ledge with some deployed on window balcony facades to help eliminate shadows. The different lengths of the fixtures allowed for the beam angles to be meticulously calculated to give optimum coverage and a classic streamlined appearance. Four of the Emineres with 65-degree optics are strategically placed around the Clock Tower which overlooks the plaza.

Eighteen Inground Eminere 2 fixtures are strategically positioned to up-light the central portico area, its four prominent columns and the relief behind to complete the look. Retaining essential classical architectural details whilst presenting the building in a new sustainable LED lighting scheme with situational relevance was key.

Uniformity and a beautiful even wash of luminance across the entire 80-metre front span united the core aesthetic with perfect 3000K warm white hues for the evenings and for which the LED engine was customised by Anolis. Flag day scenes are achieved thanks to the richness and subtlety of the straightforward Anolis colour mixing. Over 30 scenes are pre-programmed onto the Pharos controller and can be selected and activated by the operator at the touch of a button and added to if required.

The lighting scheme is powered on and off at various start-up and curfew times to respect and preserve the environment and also to protect the local wildlife, bats, insects and birdlife. Limiting light pollution and energy use has also been another key priority of the project. The DMX control of the Anolis fixtures enables the building lighting scheme to be hooked into guest lighting systems for events staged in and around the plaza without changing the programmed settings. Various arts council and cultural events have already been hosted on-site since the Town Hall got its new lighting scheme and has attracted a lot of press and social media interest for the local community.

Specification: All units are RGBW with the white chips being 3000K for a warmer white look 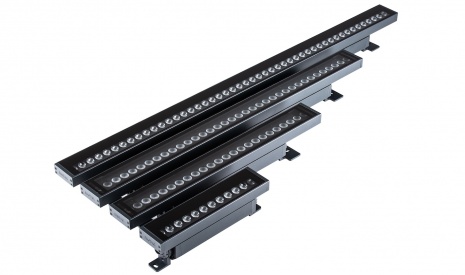 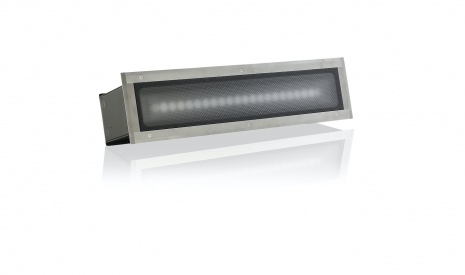 Add to Project or Add to Compare
Eminere® Inground 2/4