“Lava Tunnel” is a spectacular lava tube tunnel - one of the longest in Iceland at 1360 metres, and around 30 metres wide in places, with up to 10 metres of headroom. Its majestic and intricate interior collage of colours and textures is the result of massive volcanic eruptions 5000 years ago. 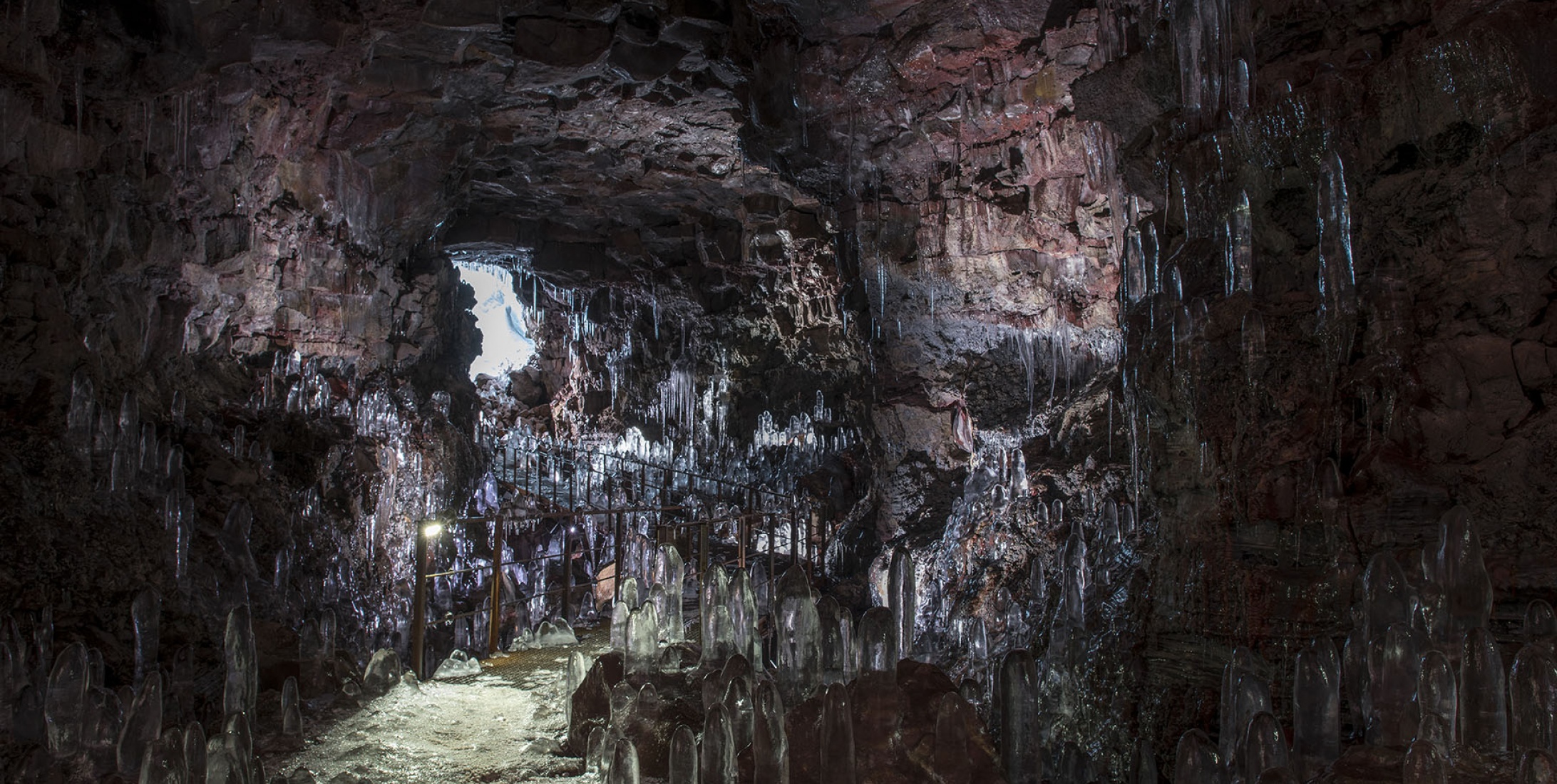 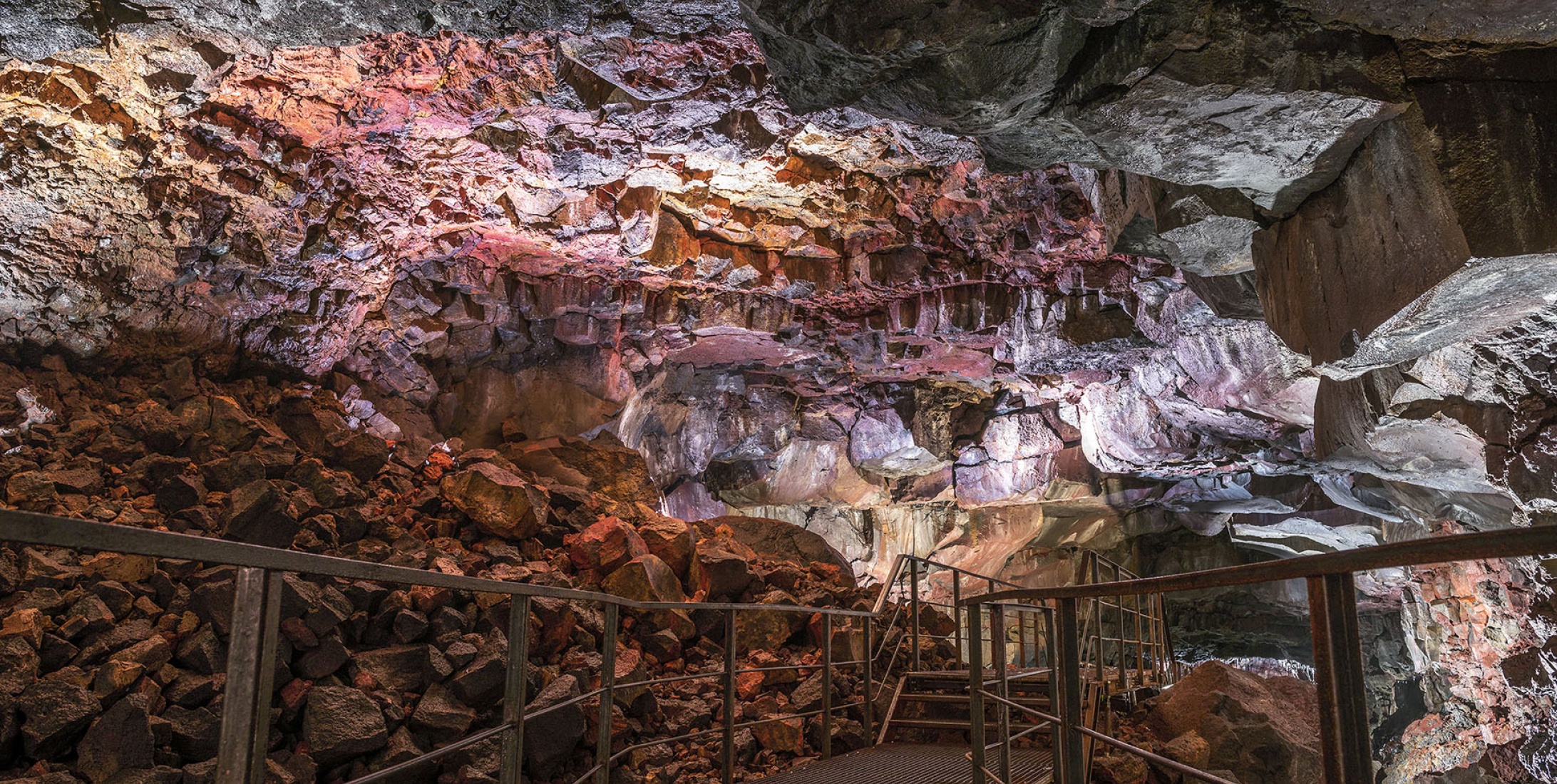 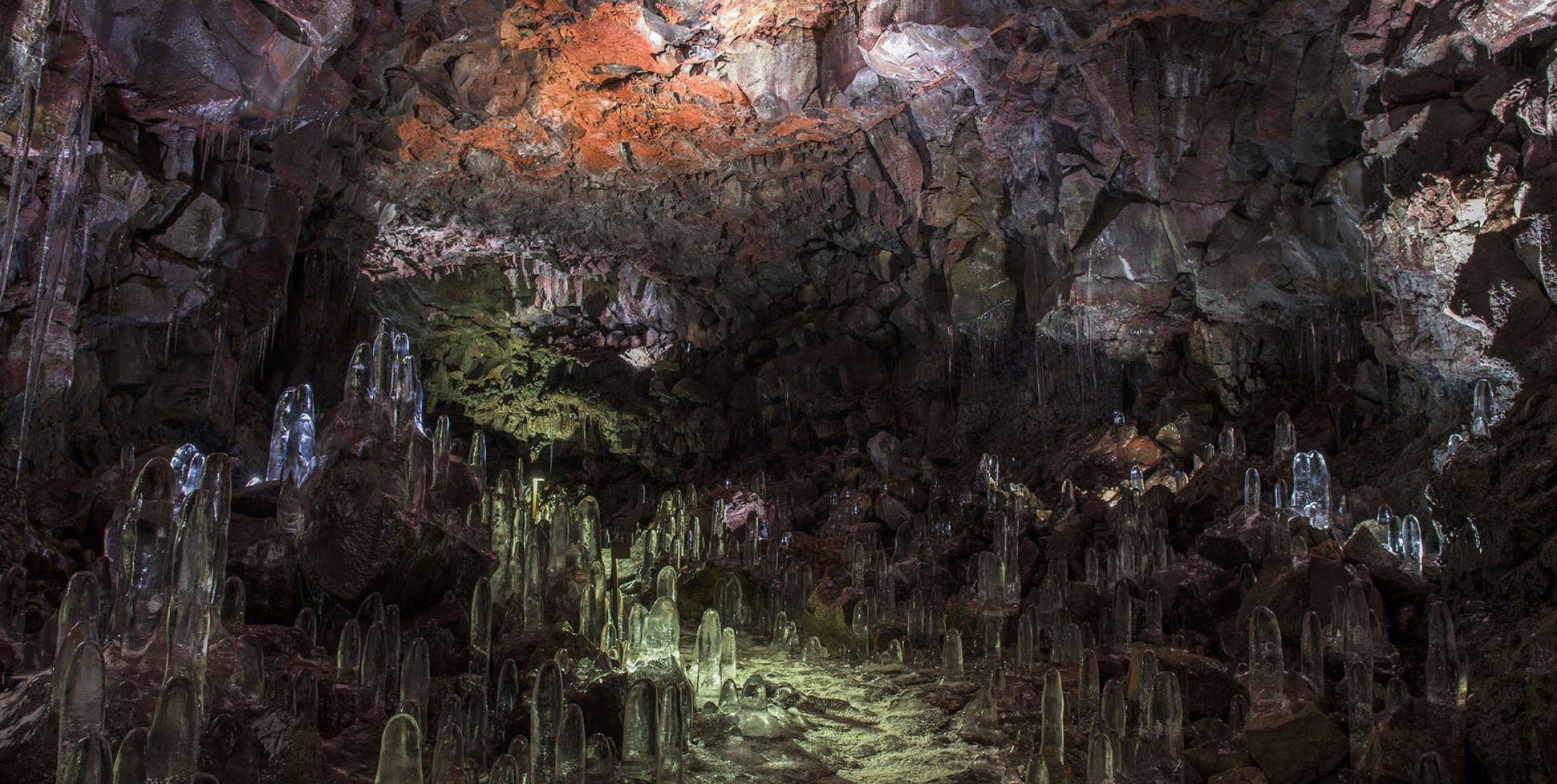 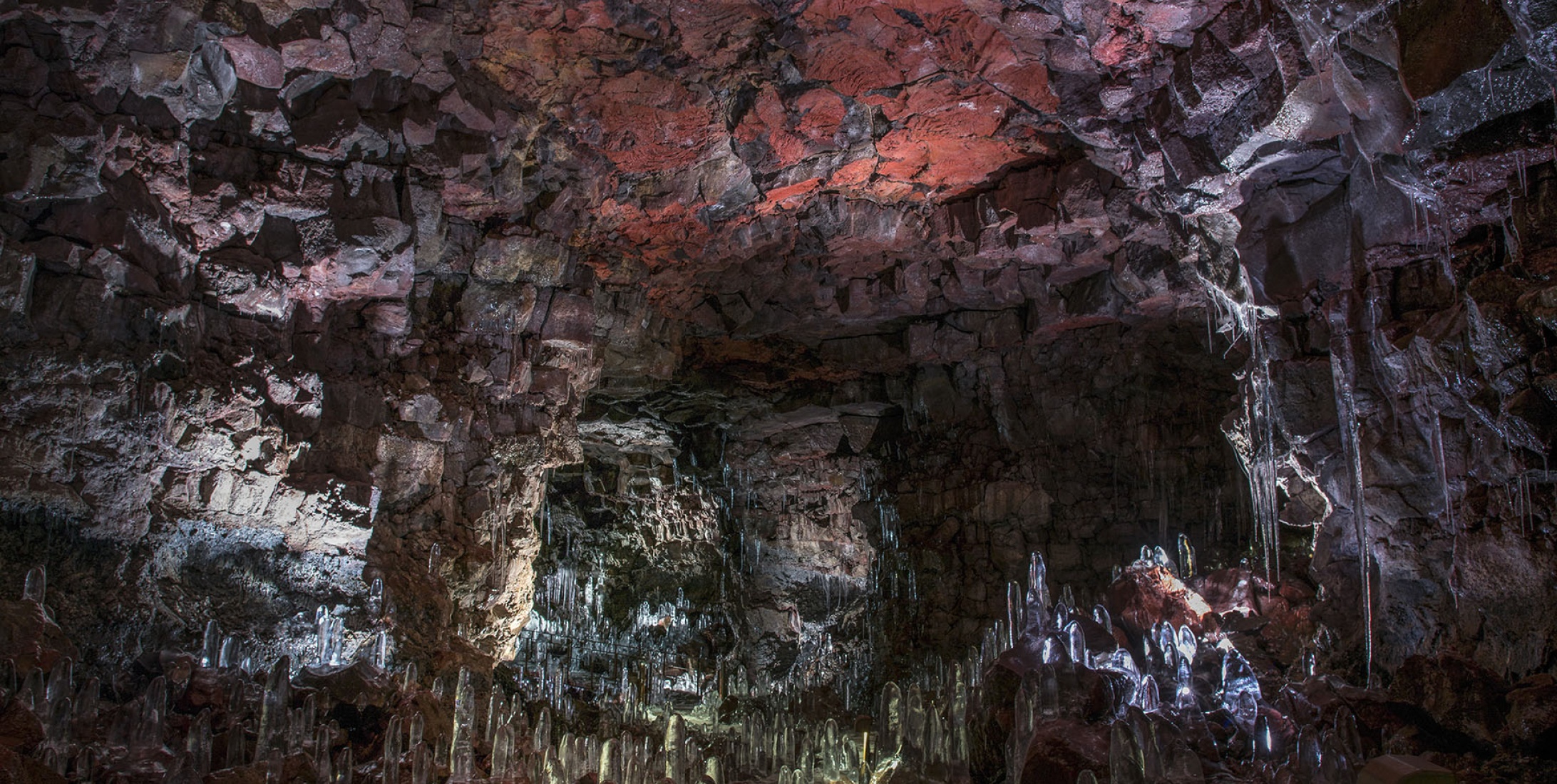 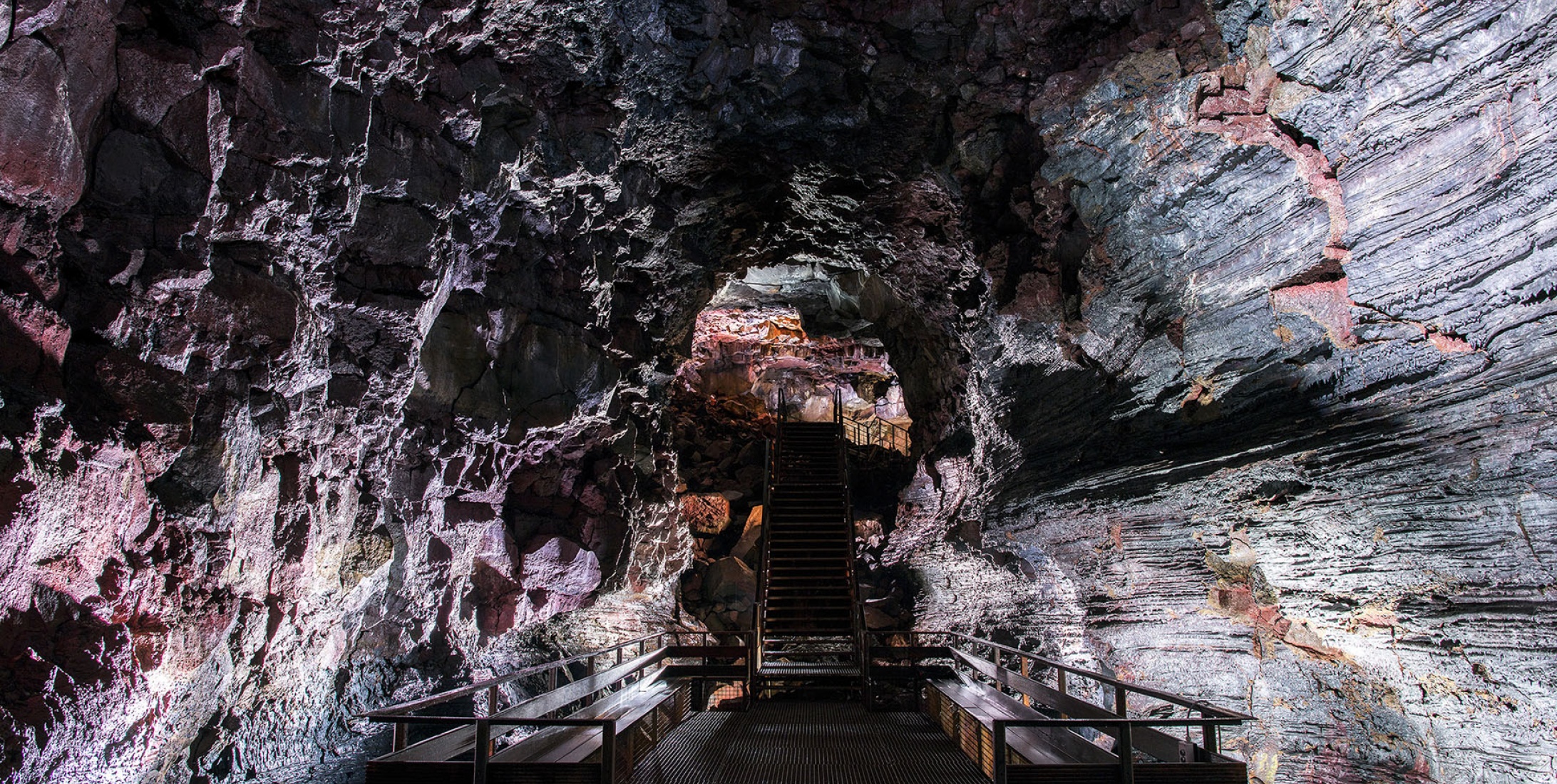 At the entrance, three openings in the ceiling create fabulous columns of light, while at the end, it splits into three smaller tunnels all equally imbibed with natural beauty. All these geological masterworks are now releveled by a creative lighting installation designed by Agust Gunnlaugsson, senior lighting designer at Oslo, Norway and Reykjavik, Iceland based company EFLA Engineers … utilising 100 x Anolis ArcSource LED fixtures.

The tunnel’s proximity to Icelandic capital Reykjavik had made it popular with visitors for some time, so much so that in 2016, it was closed due to vandalism, littering and health and safety concerns. However, its huge potential as a cool visitor attraction and an area of massive geological interest was realised by operating company Raufarhólshellir, who raised the funds for the lighting installation complete with an elevated walkway … which now facilitates guided tours for those curious to experience its copious interiors and exquisite magical atmosphere.

Once EFLA Engineers had won the tender to design and specify the lighting, Agust’s mission was to ensure that the design was as harmonious and integrated with the environment as possible, with the overall goal of producing a unique adventurous visitor experience for discerning natural art lovers.

Most of the real location work for the fixtures took place on site, as it was not a scenario that could be easily or practically visualised, instead, the process evolved organically in every sense of the word. This was also a big part of the project’s charisma and specialness emphasised Agust. For each illuminated area, an ArcSource with suitable lumen output and beam angle is positioned, aimed, focused and colour-adjusted to capture the intricacies, native colours and surfaces of the lava rocks.

The fixtures are powered by 25 Anolis ArcPower 192 Outdoor power supplies, running back to five distribution points along the tunnel which are fed via the national grid. All the lighting equipment was delivered to the project by the Anolis Icelandic distributor Luxor, together with a selection of full and half top hats, plus some modified barn doors.

Agust has used Anolis products successfully on previous projects including “Into the Glacier” in Langjökull, a thrilling tour of human-crafted ice caves including a 30-metre-high 8-metre-wide crevice over 100 metres in length, where guests stand at the bottom … so he knows that they are robust and able to withstand extreme conditions, as well as produce high quality illumination.

Getting the precise colours – via DMX control - was vital to setting the aesthetics of the lava tunnel, as was creating the required contrasts of light and shadow to intensify the natural colours and accent the dynamic geological DNA of the space. The lighting concept also helps build some subtle drama and anticipation for visitors as they pass through the entrance and walk 400 metres down the path in total darkness and complete silence – apart from the odd water droplet – to reach a peak in the lava formation. The lights are on when the guests reach this end stop.

The tour comes to a halt and the guide switches the lights off for around a minute - using a hand-held remote. The lighting then starts firing up in a pre-programmed sequence activated by the guide, and as each element of the rock and lava sections is illuminated individually, their related geology and history is explained.

The most important sections of the tunnel for lighting were identified with the assistance of a geologist. The challenges – both practical and creative – of installing lighting in this situation were numerous! Firstly, it had to be unobtrusive, fitted and concealed with minimal impact on the environment, biology and ecosystem of the tunnel. It was also important to minimise any external light spillage to protect the night skies as the area is a major destination for northern lights due to its dark skies and virtually no light pollution.

Then there is the fact that the tunnel is not an ideal place for any lighting or electrical equipment! From the entrance to the middle section of the pathway the temperature mimics the external temperature, while openings in the ceiling emit rain and snow. When the temperature drops below freezing, this part of the tunnel can be treacherous as ice covers the stone pathway! At some stages during the winter, the pathway resembles a scene from a fantasy winter wonderland-scape with impressive stalagmites and stalactites!

Deeper inside the tunnel, the temperature remains static most of the year round at 5 degrees, and humidity is also constantly high most of the year as rainwater seeps through the lava and drips from the ceiling! So, all of these considerations meant only the best built, most robust kit was suitable with the best quality output … making Anolis an excellent solution.

Add to Project or Add to Compare
ArcPower™ 192 Outdoor