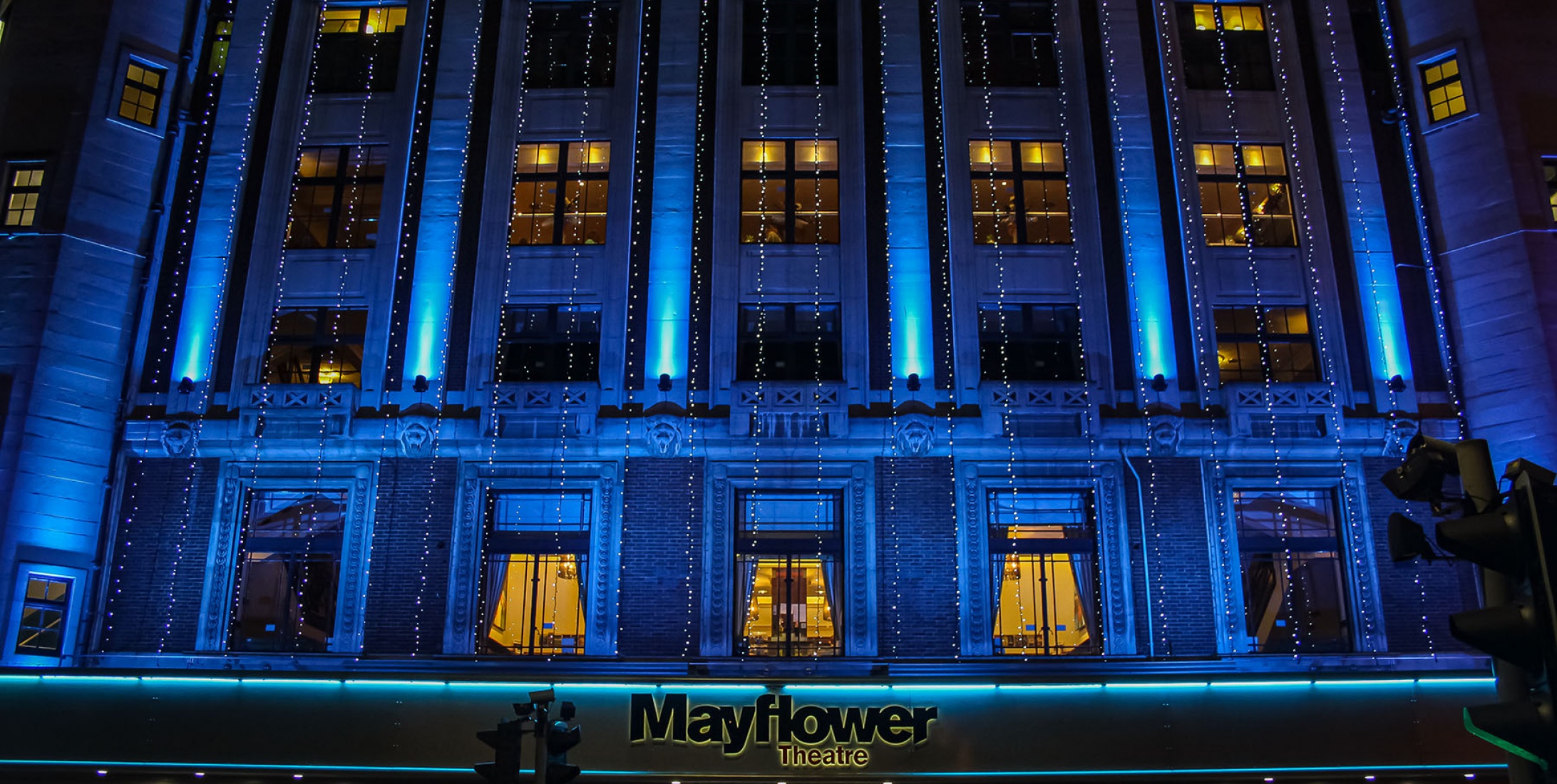 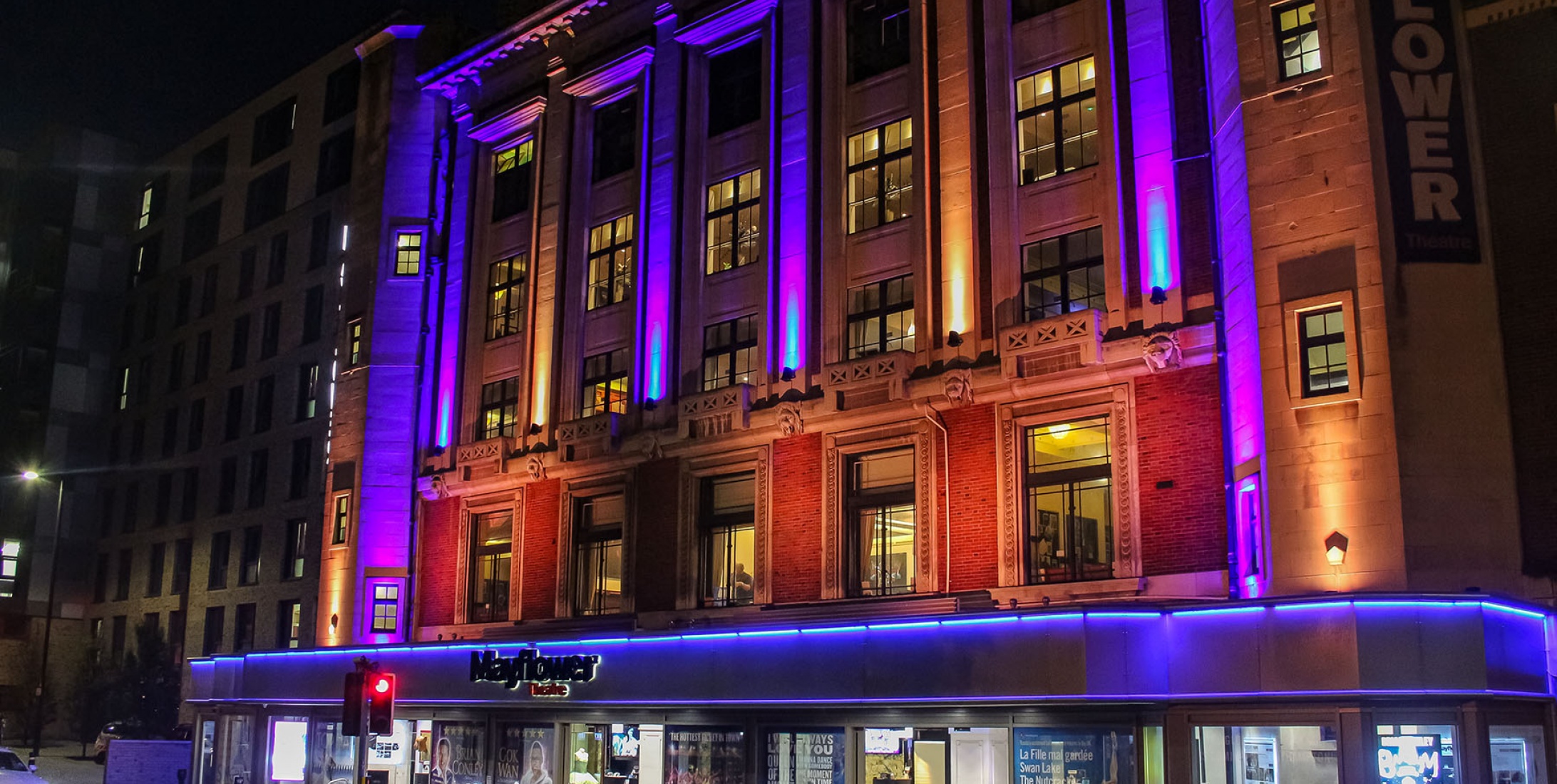 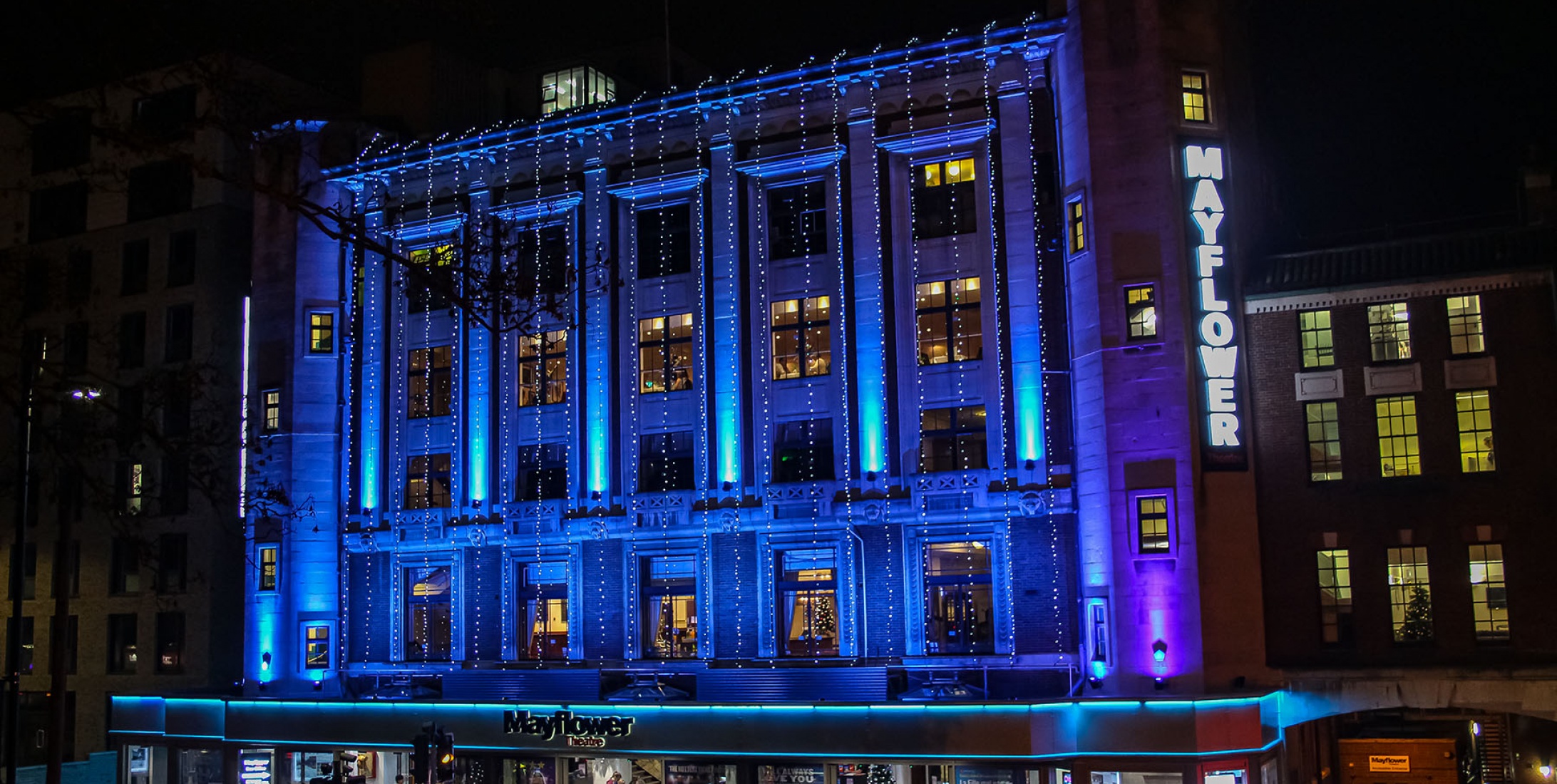 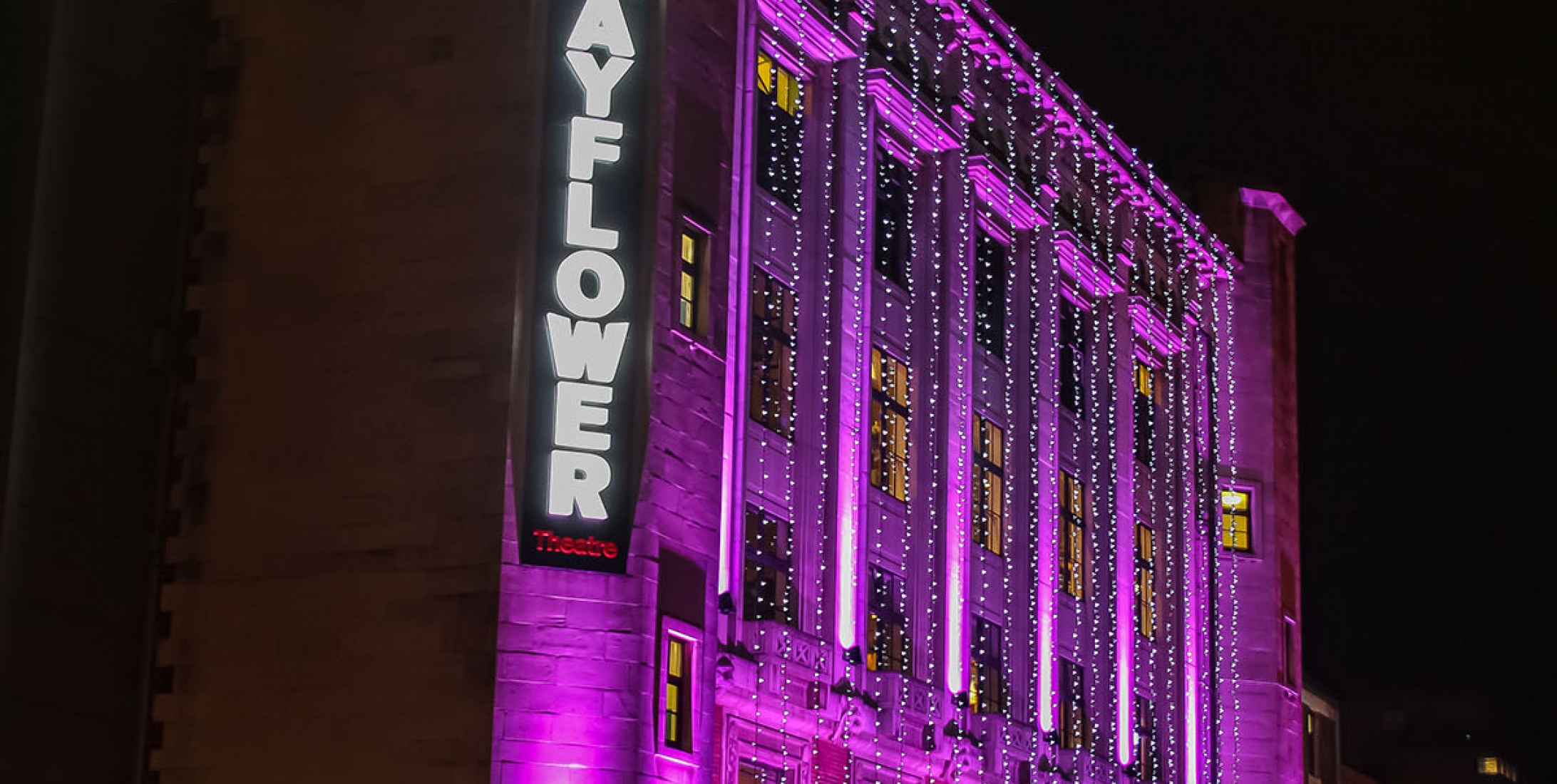 Built on the site of a motorcycle shop, the building opened on 1st December 1928 as the Empire Theatre. Sunderland architects William and T.R. Milburn designed it for Stoll Moss Empires.

The Milburn brothers also built theatres in Edinburgh [Festival], Glasgow [Empire] (now demolished), Oxford [New Theatre], Liverpool [Empire], Sunderland [Empire] and in London’s West End [Dominion]. It survived the 2nd World War with a few scars after two bombs hit it in 1940, evidence can be seen in the brickwork on the back wall of the building. In 1950 the theatre became the Gaumont. In the early 1980s, the theatre’s future was in doubt, with then owners The Rank Organisation submitting a change of licence application to convert the theatre into a bingo hall. 93000 people signed a petition to keep the theatre open, so the council bought the theatre for £650,000 and saw its last performance as the Gaumont in 1986. A trust was set up to run the building, which it still does to this day.

The theatre underwent extensive refurbishment and reopened its doors as Mayflower Theatre on 24th February 1987 with a performance of Peter Pan. The building façade is designed in the neo-classical style and constructed from Portland stone and red brick with five bays between two demi-octagonal towers at each front corner, with stone pilasters rising above the first-floor windows up to a modillion cornice. When first built the Theatre featured a tea garden on its roof, offering patrons excellent views of Southampton and the surrounding area.

At the time of construction, it was the largest theatre in the South of England and has hosted concerts by many famous artists including The Beatles in 1963, The Rolling Stones in 1966 and Jimi Hendrix and Cat Stevens in 1967 and the legendary band Queen in 1974. In more recent years its been home to a run of major musicals such as Starlight Express, The Lion King, Les Miserables, Cats and many other acclaimed productions.

The front façade of the theatre is situated on a busy street and the new lighting scheme had to effectively promote the touring shows invitingly and appealingly, whilst drawing interest and attention to the theatre from both visitors and local residents. The brief required the replacement of existing fixtures that were failing and to wash the front façade of the theatre entrance to make it more welcoming and inviting whilst enhancing its presence as a key city destination.

With a strong history in lighting classical building facades, Anolis Lighting luminaires were the natural choice as key project requirements determined smooth RGBW colour mixing, reliability and precision lighting of which Anolis fixtures excel in all areas.
Three Divine 160 RGBW units at 40 degrees were specified to evenly wash the whole façade with x6 ArcSource Outdoor 24MC Int 11 degree wider fixtures to enhance precision up-lighting of the columns and side towers with fixtures programmed to a 7 degree narrow beam. As a preventative measure to control light overspill, all the fixtures had some form of shuttering system with barn doors specifically being applied to the Divine units, whilst top hats were placed on the ArcSource Outdoor 24MC fixtures.

Considerations and benefits of the installation included the ability to mix CTC whites by having RGBW options and more pastel colours, coupled with improved colour mixing and better optical control over the luminaires. Brand reputation and reliability were also key factors in the decision process as the fixtures were used to recreate the colours and branding representation of the touring shows that offer residence performances at the theatre.

Each fixture is controlled individually and programmed from the Chamsys control system via DMX to create the colours and branding for each production. The lighting scheme was installed and commissioned by LTP Integration who specialise in projects of this nature, working closely with the Anolis UK team and key personnel from the theatre. To minimise installation time, cost and any impact to the front façade of the theatre, the new fixtures were installed in exactly the same position as the previous units.

Rachel Fox, Head Of Technical Operations, Mayflower Theatre said: "The lighting really enhances the beauty of our façade and enables us to tie our building in with the current show marketing schemes. It enables us to showcase our Theatre frontage on the busy thoroughfare it which it resides and draws attention to our wonderful building. Anolis took our concept and made it a reality, listening to our needs and suggesting the right solution, which we are extremely pleased with."

This project required powerful and efficient LED units due to the large width and height of the façade that determined considerations on the choice of fixtures. The Divine 160 produces over 15000 lumens from the 40 multi-chip LED technology and is housed inside an IP67 and IK10 unit, ensuring continued high performance in the toughest of conditions and inherent weather direct from the South coast.

Available in RGBW, RGBA and Pure White LED Chip variants and a variety of beam angles, the Divine 160 is the perfect choice for large-scale facades. The smaller ArcSource 24MC units create a powerful beam of light with over 2000 lumens produced from 6 multi-chip LEDs enhancing the intricate detail of this historic building, enabling the ability to vary the beam angles for a variety of applications and effects.

· High performance 440W lumen with phenomenal light output
· Ideal for a variety of architectural lighting scenarios including the application of
dynamic colour changing effects to the building façade
· Ability to illuminate complete areas with subtle CCT controllable white light
· Available in numerous configuration options including optics for flood or accent
lighting
· A flexible fixture offered in RGBW, RGBA, Pure White in a variety of colour
temperatures combined with different mounting options and accessories
· The ability to mix CTC whites by having RGBW options and more pastel colours,
coupled with improved colour mixing and better optical control